Brasília is a planned city situated in the centre of Brazil’s vast and unpopulated interior. Built in the mid-fifties, it was inaugurated as the country’s capital on April 22, 1960. 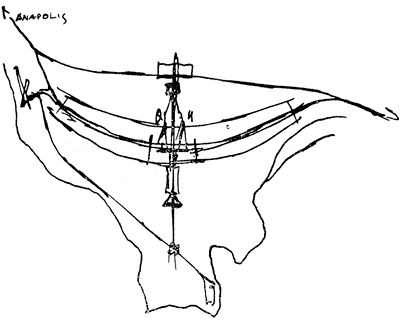 This city is remarkable for a number of reasons, not least its aeroplane like street layout (shown right) planned by Lúcio Costa. It was built in just 41 months, with its construction ordered by the country’s new President, Juscelino Kubitschek who came to power promising ‘50 years progress in five’. However it’s the distinctive architecture that draws most attention, and much of this was designed by Oscar Niemeyer.

Niemeyer is one of the few architects given the opportunity to design on such a scale, so it’s not surprising to discover many familiar design patterns and motifs on the city’s different buildings.

Whilst most buildings are typically cuboid in nature, in Brasília these shapes are often exaggerated; the hotel I stayed in had its rooms lined up along three lenghthy floors, whilst the tall, thin offices of the National Congress rise above a shallow and wide building below. Sometimes these lines are contrasted against soft curves. Again, the National Congress is an example of this, but the large dome of the Museum of the Republic is also hard to miss. Niemeyer remarked that his curves are symbolic of Brazilian women.

As many of his buildings are constructed of concrete, they are usually soften by being sat next to large pools of water. Reflection is clearly seen at the Itamaraty Palace but is also a prominent feature of the Presidential Residence and the National Congress.

One of Niemeyer favourite tricks is show to his buildings suspended off the ground. Brasília is no different, and here it’s often accomplished by the use of a distinctive pillar design, perhaps one that draws its inspiration from the city’s layout. These pillars can be seen at the Supreme Court, the Presidential Residence and at the Presidential Palace.

The most notable feature of his buildings is how you enter. This is often accomplished with long winding ramps, or more direct approaches like that seen at the National Museum of the Republic. Whilst a number of buildings have their ramps on the outside, a few have internal ramps instead. The best example of this can be seen at the Cathedral, where the decent down a long slope into darkness is rewarded by the arrival under a beautiful stained glass roof, with light flooding into the building.

No city can compare itself against Brasília’s unique landscape, the result of three men with a strong vision. Built to announce Brazil’s arrival on the world stage, Niemeyer’s buildings gave the country an unmistakable voice with which to do it.

Niemeyer is now 103 and still relied upon by the city for many of their key architectural projects. Yet upon his passing, it would seem he has left ample documentation on how to design the buildings of its future.